Chinese appreciates calligraphy, the well educated person will write some old wisdom passage they like and hang the calligraphy on the wall to share with friends and act as a reminder for oneselve.
I also put one on my wall, it is from Laozi, when I was very disappointed of the bad people around, I reminded myself of what Laozi said.
Laozi (also Lao-Tzu or Lao-Tze) was a philosopher and poet of ancient China, period of the 5th or 4th century BCE. He is the founder of philosophical Taoism.
I like his words “知白守黑”, it reads from left to right in the below calligraphy, the words literally mean knowing 知 the white 白 (日is sun, a dot on the sun is white), staying 守 in the dark 黑, it has deep meaning, you can imagine the picture “yin-yang”, there is always a white dot in the black, or a black dot in the white. 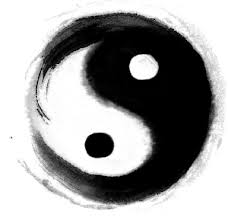 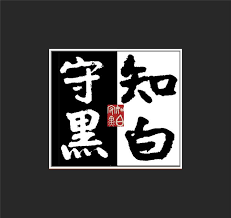 Laozi believed knowing the white, staying in the dark is life, situations happend in life and it is also a philosophy of life. Knowing the white, knowing the right and wrong, and staying in the dark is necessary…like knowing what is right and what is wrong, you have a bright heart but the world is avoidably dark, black, you still have to stay in some darkness what you can do is to wait in the dark for a better future, the little dot of white will soon come. That is also one aspect of “yin-yang” talks.
Chinese culture is long, the wisdom almost reached its peak before the birth of Christ and til several hundreds of years afterwards, that we can see the Japan, Korea were greatly influence by Tang dynasty. However, a culture that is too long also creates burdens and misbehavior. Also the culture revolution almost destroyed a great deal of the Chinese tradition. I just finished a book written by a well-educated lady (master graduate from LSE in 1940s) imprisoned during culture revolution, she clearly depicted the change before and after culture revolution, culturally how people change after the revolution, explaining why China/ some Chinese people were so corrupted and this change continue to influence til now.